We've got several new and exciting projects in the works. Come back to this page to see the latest news! 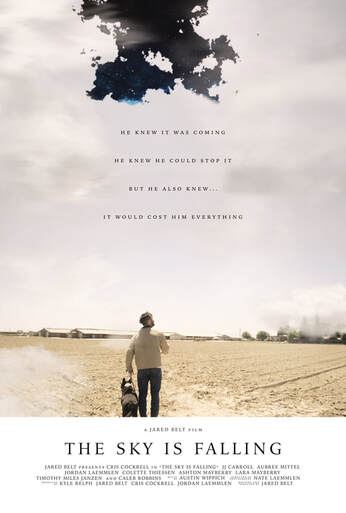 THE SKY IS FALLING is a 30min short film that follows George, a disgraced physicist who is convinced that the planet's atmosphere is going to destabilize from government tampering in weather control. He has the ability to stop the end of the world, but his obsession causes him to lose his family in the process. He also has a secret elevator in a port-a-potty that leads down to a secret underground hangar beneath his ranch, where his obsession has led him to construct a spaceship that he will use to save the world. Cool right?

This film is in the genre of Sci-Fi/Drama with a bit of an experimental side as well. The experimental nature of the movie comes in with the unique way we tell George's story. The film will actually show two totally different versions of his life. In one version, he chooses to follow his obsession to save the world, but loses his family in the process, and the other he chooses to ignore what he knows is coming in order to keep his family close. Both versions are very different, but the real story is in the similarities for George, and the way he deals with regret.

We shot the film in August of 2020, and came back again in March 2021 for pickups, and we are now in post-production, with hundreds of visual effects tasks to take care of! At the moment, Jared is handling most of that himself, and is working day and night to get it done. The goal currently is to release the film sometime between September and December 2021!

Enjoy the official trailer below! 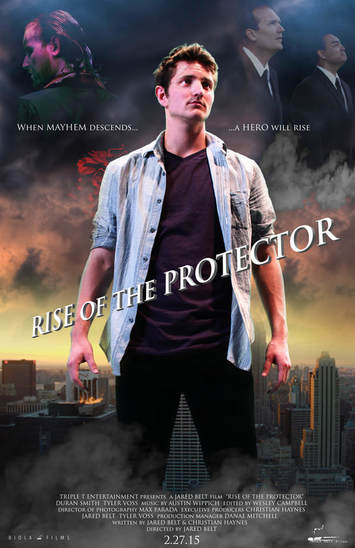 RISE OF THE PROTECTOR   (Original Version) - On Its Way!

For those who have been keeping an eye on Jared Belt Films for a while, I am sure that this particular little film has been the subject of much curiosity...And there is indeed an interesting story behind it.

Filmed from 2013-2014, this film was Jared Belt's senior thesis film at Biola University, and was one of the most ambitious student projects at the time, being that it was Biola's first "Superhero" film, and that it ranked as the most Visual-Effects-Heavy student film in Biola's history. With a runtime of just under 20 minutes, this short film had over 90 visual effects shots, compared to the previous Biola VFX record-holder, at around 30.

Due to the ambitious nature of the film, and the high-standards Jared Belt held for the quality of the effects, the film had to be "released" in an unfinished state, for it's official Biola Premiere on 2/27/15. However, Jared was entirely unsatisfied with the "unfinished product", and decided to dedicate his own time to finishing the film's intensive visual effects himself.

This would lead to the next four years of Jared's professional life, after graduating, being spent working on the remaining shots that were left unfinished in the "Premiere Version". He would juggle the FX work with his career, and other jobs, which didn't allow for his undivided attention to be on finishing those FX shots. And, as time has gone by, his ability to devote time to the project has been lessened. However, he has finished nearly all of the remaining shots, and continues to devote time to it, whenever possible.

Jared has decided not to take this film to festivals upon completion, as it has been so long since its original production, and he feels the film no longer is fully representative of his current skills as a filmmaker. SO that is good news for those awaiting this film, because it means that when it is finished, he will be releasing it online, for free! So keep an eye out for that, and come back here for the latest updates on this film. Jared has not forgotten about it, and is very excited to finish and share it with you all!
WONDER REALM - Experimental Feature - Coming 2022
This one is very special, and a passion project for Jared. It is also perhaps the most experimental film project he has ever attempted. This project will be a new film, made almost entirely in the editing room, using material from a multitude of projects that he has already produced (including The Sky Is Falling, Rise of the Protector, and Legend of Gurthang). The idea came out of a desire to present something new, and a frustration with certain past projects that he hasn't been able to show very publicly (aside from here on his website). With Gurthang, there are copyright concerns, so he hasn't released it to the public. And then there is Protector, which has been a source of frustration for him as well, for two reasons: one, the effects are still needing to be finished, and two, as he has evolved as a filmmaker and storyteller, he has become a bit dissatisfied with the film in it's finished state. Budget restrictions and other problems led to a significant "trimming-down" of the original script, and produced a product that he isn't as thrilled with anymore. So, he is planning on doing two things with it.

The first thing is that he intends to release the film in its original state, as promised above. He will finish the remaining FX shots, and release it to show what it was made into. This is because he feels he owes it to those who have been waiting to see it, for them to see what it was in it's finished state, with proper effects.

​The second thing he will do is use the material from that film, combined with other material from his other films, to help create his latest vision for a story that is bigger than any of them ever were before! The new film project is so different from his past works, and yet it is entirely made up of his past works! This project is currently being edited together by Jared, and he is eager to share it with you all!

In the meantime, enjoy the Concept Trailer!